The Best Way to Celebrate Memorial Day is:

A. Visit your favorite winery
B. Road trip to the Shore
C. Multiple cookouts/pool parties
D. Hang the hammock under a tree
E. All of the Above

All are correct, but let’s recall the real meaning of the day, uncomfortable as it may be:

• We honor those sons, brothers and fathers, and more recently the daughters, sisters and mothers, who went to war to serve our country and were killed in action doing so.

• We extend this honor to those who served and survived, but who are not unscathed. No one returns home whole from war, wounds visible or not.

• We also honor those still in uniform today, serving our nation at war, whom we hope will return home soon.

So, which is the real way to observe Memorial Day – with gleeful intemperance or somber remembrance?

It’s both. We need to remember, even though we’d really rather not. It is the national irony we endure annually on the last weekend of May.

Consider the small portrait in our farmhouse library of a dashing infantry officer, cigarette in hand, uniform decorated with campaign ribbons, a combat infantryman’s badge, and the shiny insignia of a captain. He was just 24 years old, a veteran of the Battle of the Bulge, with the hardened look of a man ten years older. This black-and-white portrait was displayed in his parents’ living room in an era when nearly every household sent someone to war.

Twenty-five years later, he spent Memorial Day weekend on a tennis court in leafy Short Hills, New Jersey, with contemporaries who too went to war but now did everything possible to forget it. No parades, no ceremonies. They focused on other things, like tennis, quenched by gin, tonic & lime.

My dad survived his war, but he was not unscathed. He didn’t survive middle age.

There is another portrait in our farmhouse but it’s hidden in a drawer. It is that of a 30-something U.S. Army major, a physician with a gentle smile, whose life ended instantly in a Middle East desert. He was killed by an IED (improvised explosive device) or a landmine, we still don’t know for sure, but it doesn’t matter. My wife misses her brother, Brian, intensely. She has never been the same, and can’t bear to see his portrait daily.

And so now it is we who avoid Memorial Day parades and ceremonies, well-intentioned they may be. They are just too heavy, sometimes evoking an impossibly large lump in the throat or inconsolable sobbing.

So enjoy the hammock, cookouts, the Shore or even your favorite winery. If it’s here with us, you may share a story of your own or keep it to yourself; we understand the need for both. But whatever you do, for just a moment, please consider the memory in Memorial Day. 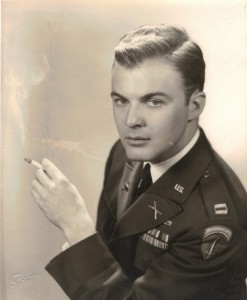