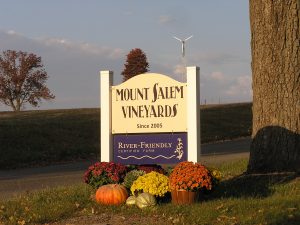 The end of an era is upon us with the imminent paving of Mount Salem Road.  We’ve waited 18 years for this, assured by five mayors who said, “definitely next year”, and one who said it never will happen.  Another admitted that it’s just politics, you know.

Unpaved rural roads do have a certain charm and many people around here would like it to remain. But they don’t actually live on the unpaved portion, or grow fine wine grapes right next to it, or deal with the consequences whenever a vehicle speeds by.

Consequences like a permanent layer of fine dust on everything, and the inability to open windows for fresh air, or even hang laundry on a clothes line unless it’s just rained.  Gutters that clog with silt instead of fallen leaves; central air conditioning systems that fail because they, too, choke with dust; and the inability to keep paint on this 1811 farmhouse because dust prevents it from adhering properly.  Perhaps worst of all are grapevines that are less productive because of they don’t like to breathe road dust any more than people do.

Some neighbors drive slowly by, mindful of the consequences, while others think nothing of exceeding 50 MPH and showering the farmhouse with dust, gravel and arcs of rain or slush puddles that splatter our windows.  Indeed, some neighbors, so-called, took to referring to this as “The Dirt House”.  Nice.

For these reasons and without hesitation, we welcome the paving crew next week.  Yet we pause for a moment to reflect on what’s about to end.

This road, about 3 miles long with distinctive twin doglegs at its midpoint, can be seen on the earliest maps of Hunterdon County and was believed to begin as a path used by the Lenni Lenape.  It bisected the Abbott Taylor Farmstead, of which our farm was the center, that has been cultivated for over 300 years.  As recently as 50 years ago, according to a neighbor who was born across the road from us, Mount Salem Road was so lightly traveled that it not only was unpaved but had a grass strip right down the middle.  How’s that for rural charm?

While Mount Salem is not literally the last dirt road in Jersey, it sure felt like it at times particularly when one of those consequences reared its ugly head, leaving us angry, frustrated and occasionally humiliated.  All of that is about to pass, as most things do.

Come visit soon, or at least drive by, before this era comes to an end.